Life Principles and the Deep Sea: A Written Series based on interviews with Elite Diver John Chatterton 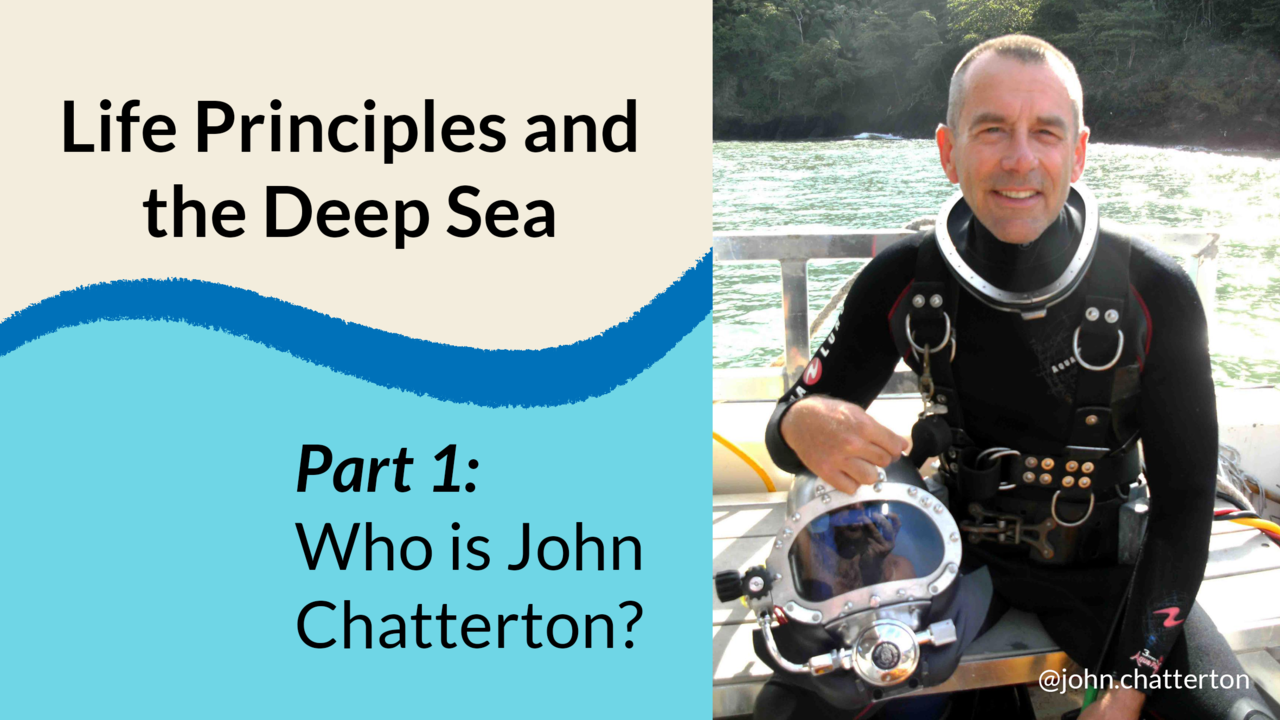 Life Principles and the Deep Sea: A Written Series based on interviews with Elite Diver John Chatterton

A series by Phylinda Moore

Part I:  Who is John Chatterton?

What an elite diver has to teach us about discipline, leadership, and effectively applying our talents.

What happens to a person’s essence when you put a human under extreme pressure, and every moment might mean the difference between life and death? John Chatterton, an elite deep-shipwreck diver, believes it is under this pressure that a person’s essence is revealed. The deep ocean is the most unforgiving environments a human can choose to put themselves in on this planet.  Here, your life depends on your success. “We were never meant to work in the underwater environment. But we do,” says John.

John Chatterton is also a war hero, and a modern explorer. He has solved some of our greatest underwater mysteries. When you put all of his accomplishments together they read larger than life. But John would likely tell you that they are simply the result of his lifelong dedication to perfecting his process. He says, “I’m not perfect but I keep trying to be.”

John’s efforts have led to extremely profound results. Life saving results. And so we have the privilege of sharing his dive lessons, which double as life lessons, with you. As he says of diving, “so much of this happens on the level of human psychology.”

One of John’s favorite quotes comes from Tom Eadie, a diver John describes as “the most amazing diver in the history of diving. Ever.” To understand more about John’s reference to Eadie, it should be noted that when he received his second Nacy Cross it was for: “Thomas Eadie” extraordinary heroism and fearless devotion to duty during the diving operations in connection with the salvage of the U.S.S. S-4 sunk as a result of a collision off Provincetown, Massachusetts, 17 December 1927. During the period, 17 December 1927 to 17 March 1928, on which latter date the ill-fated vessel was raised, Eadie, under the most adverse weather conditions, at the risk of his life, descended many times into the icy waters and displayed throughout that fortitude, skill, determination and courage which characterizes conduct above and beyond the call of duty.” (“Thomas Eadie”, n.d.) Eadie says, “Some men will never make divers. Any man can go down, I believe, but not every man can dive and accomplish anything.” John has, and continues to, accomplish.

“We are creatures of vision.”

John’s take on things has kept him, and many others, alive in unimaginable conditions. He develops and practices his principles in an aware and deliberate way at a level that few are willing to commit to. And he continually test himself, pushing to refine his abilities. He teaches his students that, “experience does two things. 1. fine tunes the system 2. improves the psychological side of things.”

John began deliberately developing himself in earnest since coming of age during the Vietnam War. At eighteen he volunteered to become a medic on the front lines, which at the time meant certain death for most, because “he needed to understand.” (Kurson, Shadow Divers) On his first day in the field he was sent to replace a medic that had just been killed. On his first patrol he heroically risked his life to save another man. His experience in Vietnam started his lifelong approach seeing things for himself in order to learn and assimilate his knowledge about life. All of his accomplishments source from John’s ability to ‘learn from’ and ‘prepare for’ what he experiences and chooses to take on. He eventually found his passion in deep sea diving. When he discovered that he could channel his talent into a profession, he spent some years as a commercial diver, which proved to be a rigorous training ground. He learned to feel his way through the water, instead of relying on sight and the importance of training his mind.

He was a supervisor off of the Manhattan coast and on September 11, 2001 was working on a project in the water underneath the World Financial Center, across the street from the Tower #1. He saw the first plane strike and quickly pulled his men out of the water. Debris from the fall of the second tower crushed their headquarters but John had already gotten the crew to safety. His quick action saved their lives.

Over time, he built up his knowledge and skill until becoming a full time explorer and instructor. Few can touch him in terms of experience. Along the way he’s had books written about him, and documentaries filmed about his discoveries. He’s discovered treasure on many deep sea wrecks around the world. Among many notable accomplishments, here are just a few:

He identified a German U boat off the coast of America, that neither country knew was there. The process took six years and claimed five lives. John didn’t give up in the face of these odds, and succeeded in identifying the wreck through sheer tenacity, preparedness, and calculated risk taking.  [Shadow Divers]

He discovered the wreck of the only confirmed pirate ship to date. The truth of what he, and his partner, discovered has rewritten history. [Pirate Hunters]

We can all learn from teachers who’ve suspected that it was worth looking below the face value of an experience, and have systematized their findings. I interviewed John Chatterton over a three-day period. Part of this process involved observing a course that John taught for a 300ft/trimex certification and going on a ride along on the boat while they completed their certification dive. Some timelines and conversations have been condensed. All quotes are John’s unless otherwise credited.

“All of this is human psychology.”

It’s October 2017 and hurricanes that battered the coast of Florida have almost cancelled this class twice. After a change of venue and date we gather. There are only two students because John will not dive with people he doesn’t know or trust. He is extremely selective when it comes to his students and dive partners.

One of the students has been training with John for some time, Luke, has a big smile and a ready laugh. He is a dive instructor in California and has flown across the country for this course. The other student, Matt is friendly and quiet, also a highly experienced diver. Both are already certified at 200ft but explain that in the scheme of things, that isn’t that deep compared with what they are about to attempt as each additional foot below 200ft acts as a multiplier in both pressure and potential danger.

Both are good listeners, and completely concentrated on diving. As John repeatedly reinforces, “there is no nine-one-one at 300ft. This is not where you go to get away from it all.” The deeper you go the greater the pressure differential. Make sure you are prepared as humanly possible.”

Luke is drawn to John’s style because “John has a different philosophy and he is absolutely different in his teaching style than anyone in the field. He is absolutely cutting edge.” Luke has over ten years of diving experience with over 1800 dives under his belt. He states John’s dive lessons are “how you approach a lot of life.”

“What does your mindset have to be?”

If you put a lump of charcoal under pressure, you get a diamond. Experience has taught John that if you put a human under extreme pressure, you will get the essence of their psychology. He says that “no matter what, the essence of your personality emerges in the deep. To stay alive, you need to be a diamond, a rock. Keeping your head keeps you alive.”

He tells the students up front, “I’m not great at the administrative stuff for the course but I am great at the diving and survival stuff. I can concentrate on your survival or prepare for your death. How about I first teach you to dive and not be dead? We are far better taking the road of prevention. I’m prevention.”

The course is three days long. The first day they do a dive to test out the gear. The next day they go deeper and the third day they complete the deep dive to 300ft.

John is infinitely quotable. This is by design, as he needs his lessons to be memorable at any depth. He’s training them to stay alive. “I don’t make up a lot of bullshit rules so that people lose respect for the rules. That might be okay for 100ft but not for 300ft. Not where we go. We need a different kind of mindset. Some of the diving stuff is really like caveman shit. It’s not very cerebral. But these dives, at these depths, are very cerebral. We have to be dialed in with this stuff. We have to work at it. We are like journeymen. We are craftsmen. So much of this stuff is far more art than science. It’s not what we’re doing but how we’re doing it. The better we can use our tools the better our art. Being able to learn, understand, and manipulate our psychology will improve our art.”