How to Smash a World Record 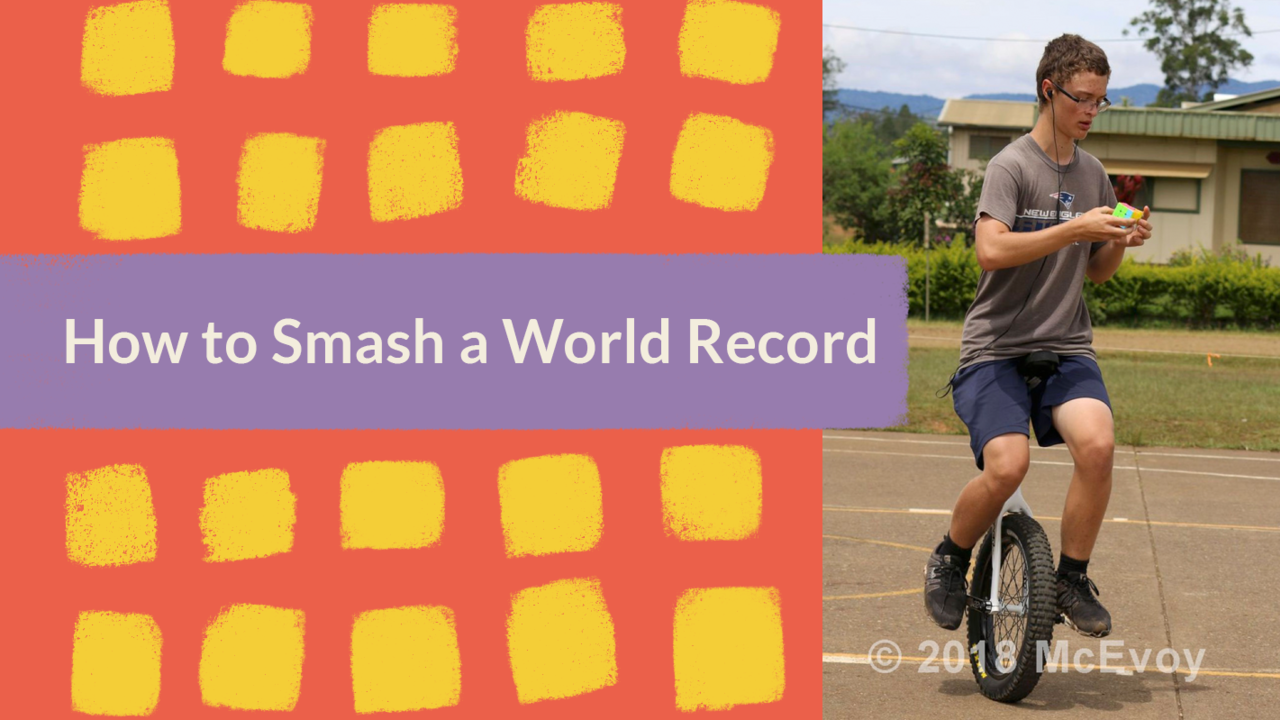 Did you ever wonder what it would be like to beat a world record?  We had the chance to interview world record holder Caleb McEvoy about his experience. He officially holds the world record for solving the most Rubik’s cubes while riding a unicycle. It might surprise you to learn that Caleb was only 15 years old when he conquered this record.

Caleb’s process is a perfect example of how aligning your talents with activities you enjoy, combined with gaining knowledge and practice can lead to mastery.

His official entry in the Guinness World Records reads: "The most Rubik’s cubes solved on a unicycle is 250, achieved by Caleb McEvoy (America) in Ukarumpa, Papua New Guinea, on 31 March 2018. Caleb spent over 2 hours 35 minutes on his unicycle whilst achieving his record."

Like most teenagers Caleb enjoys foods like “pizza, chicken, ice-cream and chocolate.” And like most teenagers, he is just looking for things to do that he enjoys. He is originally from Wisconsin, USA but has lived most of his 16 years in Ukarumpa, Papua New Guinea (minus a few years here or there in the States). His other hobbies include, “in no particular order: baseball, basketball, computer animation, speed cubing, mountain unicycling, and trials unicycling.” We asked Caleb to describe how he came to accomplish his world record title and he said, “In late 2015, I saw the Guinness World record for most Rubik’s cubes solved on a unicycle, and since I knew how to do both, I started practicing them both with my goal being to break that record.”

Caleb thrives by living each moment as it comes, his planning takes place when he wants to obtain certain goals. The personal quality he feels is particularly suited to breaking this particular world record is, “when I want to achieve something, I set my mind to it, and accomplish it. I wanted to break the world record, so I made that my goal.”

Caleb’s phrase, “fun challenge” is an important one. Shin’ichi Suzuki, creator of one of the most universally applicable methods for fostering talent would approve because he says that developing excellence in an ability should “begin with the pleasure of having fun” and as you move in the “right direction by taking advantage of the pleasure of having fun--no matter what the area.”

Fun, pleasure, and enjoyment are key to deep practice in an activity. As Daniel Coyle, author of The Talent Code, notes, “deep practice isn’t a piece of cake: it requires energy, passion, and commitment. In a word, it requires motivational fuel.”

When Caleb describes seeing people riding unicycles and having a desire to learn, he is describing what Coyle calls ignition, or identifying “the instant that passion ignited.” Coyle believes there are a lot to learn about the qualities of these moments by “looking more closely at the moments themselves. So let’s break it down:

Caleb’s abilities in these activities are all self-taught. He practiced on weekends and school breaks, and didn’t keep track of how long it took him to build his skill, “because it was just fun to do.” He says his main obstacle was “mainly building endurance.” One tool he uses for support is to listen to music through his headphones because, it helps him engage longer while practicing these activities.

Caleb has natural talent in both of these activities, and further he set a goal in alignment with his talents. Then, through dedicated practice, he continually improved and refined his performance. He understands the critical ability to take action on his thoughts. Suzuki says that, “if action does not accompany our thoughts, however, no matter what we think or reflect upon, the new path we have carved out will amount to nothing. We must therefore, create in ourselves the ability to take action, to practice-- it is imperative that we do not forget this tenet.”

The talents Caleb feels contributed to his success is “perseverance and determination - the ability to keep pushing even when you feel like you can’t go any longer. I had to keep pushing to break the record, as I didn’t have the most comfortable unicycle seat.”

He knew he was ready to break the record when he’d broken it “multiple times in practice – at least 3 or 4 times before the actual attempt, but I didn’t push myself to my limit until the official attempt.”

Caleb applied before he was ready to break the world record to Guinness and waited some months for them to approve it. He took the next steps and followed their rules they had listed for this record, practicing, and setting up an official attempt date. Caleb had to have 3 independent adult witnesses and the entire record was also videoed in a public place. Once completed, it was sent to Guinness with the official paperwork.

Caleb’s follow through mirrors Suzuki’s teaching, Through concerted repetition, we are able to master and turn into ability whatever we wish to learn. I have learned the value of bringing to bear this iron principle in such contexts, too. This is why I emphasize the importance of putting into immediate action even the smallest thoughts we entertain. We must exhort ourselves again and again, and without losing heart, to stick to our goals until they are accomplished. I have discovered on multiple occasions that if we repeat something until it is absorbed and becomes habitual, what we first thought impossible, proves itself possible, and formerly closed paths begin to open up.”

When the day came to break the world record, Caleb expressed feeling nervous, and at the end tired, but also happy to complete his venture and “to have smashed the record.” He felt he had support from his family, “my parents were there, along with my siblings, to cheer me on the entire time.” He celebrated his accomplishment by having an ice cream party with friends.

As of right now, Caleb isn’t spending much time riding the unicycle while solving the Rubix cube; or currently focused on a developing a new skill, because he currently is a full-time student. After high school he would “like to pursue a degree in computer animation.”

When asked if he has any plans to go for another world record, he replies, “I’m considering it.”